You are here: Home / Crochet Tutorials / How To…Make a Pompom
Here is a super simple way to make a pompom.

How To Make A Pom Pom

If you do not have a pompom making tool, cut a piece of cardboard to a width of 1-inch.Place a piece of scrap yarn (of the same colour) across the cardboard in the opposite direction than you plan on winding your yarn. This will be used to tie your pompom securely. You can put little notches in the cardboard to catch the ends and hold them in place while you wind the yarn to create the pompom. 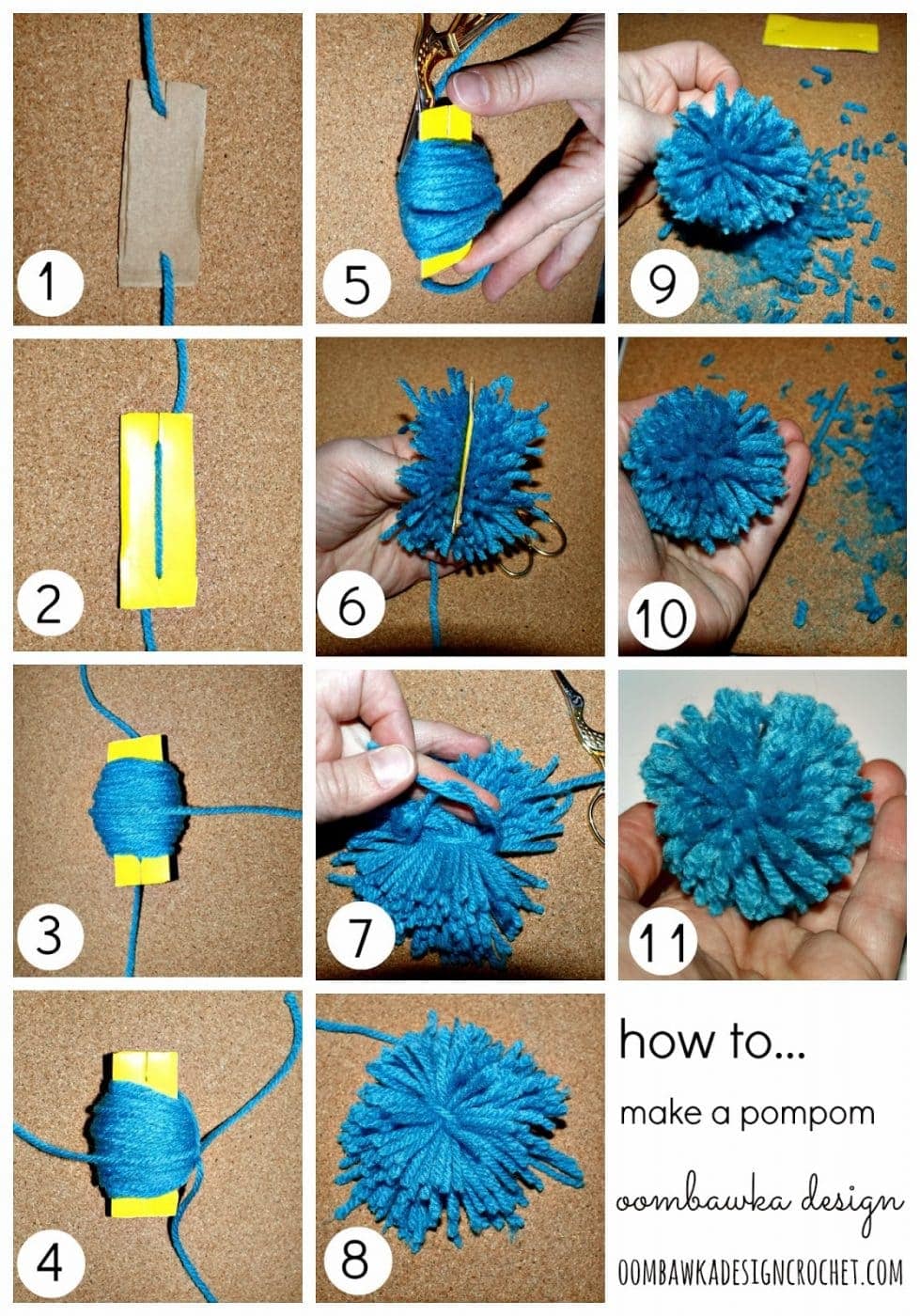 Step 1: Place a piece of scrap piece of yarn along the cardboard vertically (my cardboard was cut to a width of 1”, with a notch at the top and bottom to insert and hold the yarn).
Step 2: Make sure the ends of the scrap yarn are held in place by the notches you cut on either end of the cardboard to hold it in place when you create your pompom. Notice how the yarn is on top of the cardboard on the yellow side? This is the side you will need facing you to tie the strands around the yarn. If you tie the scrap yarn with the other side facing you it will tie around the cardboard and the yarn and it won’t work!
Step 3: Wrap the pompom yarn around the cardboard width multiple times (for my pompom above I wrapped 100-times with worsted weight yarn). For a thicker pompom wrap more times!!
Step 4: With the yellow side of the cardboard facing you, pull the ends of the scrap yarn free from the notches and holding both ends slide the scrap yarn toward the edge of the cardboard.
Step 5: Cut the pompom along the opposite edge of the cardboard from where you tied the strands.
Step 6: Slide the cardboard out.
Step 7: Using those scrap yarn ends tie the pompom again (as many times as you want) to secure the strands.
Step 8: You will now have something like this.
Step 9: Trim and shape with very sharp scissors!
Step 10: Trim and shape some more – this is a very messy process.
Step 11: Be proud of your little pompom!
To make larger pompoms increase the width of your cardboard (2” makes a very large pompom) and wrap more times with your yarn.
I have a pompom making tool I picked up from a clearance rack a year ago – it has a 2” wrapping side and a 1” wrapping side. It also has slotted edges to use as a guide for your scissors. I find it easier to use. Here is a pompom I made using my pompom tool.

Basically the same process as above except because of the shape of the tool you are able tie it securely down the centre as many times as you want before you even cut the yarn! The above pompom is made using super bulky yarn and is the same as the pompom I used for the top of this hat (on the left). 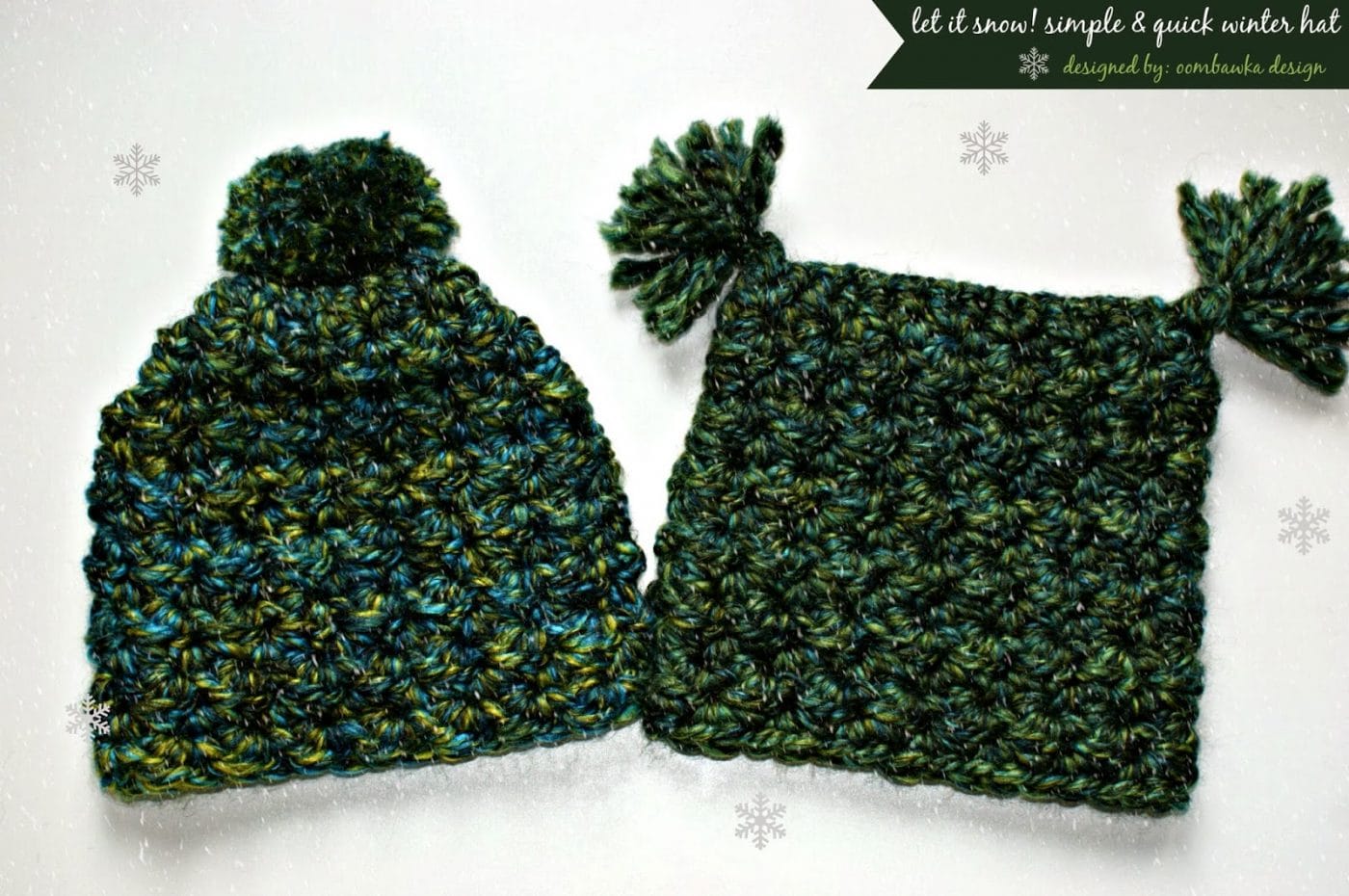 Linked up at these fabulous parties: 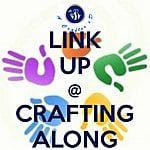 You May Also Enjoy These Posts: