Crochet Tutorials you may just want to save!

1. How to Crochet the Loop Stitch – Craft Passion
2. Standing Double Crochet – Moogly
3. Crochet – Three Ways to Work in the Round – Look At What I Made
4. The Twisted Single Crochet – An Alternative to the Crab Stitch – My Hobby Is Crochet
5. Foundation Single Crochet – Doris Chan Crochet

Pin This For Later! 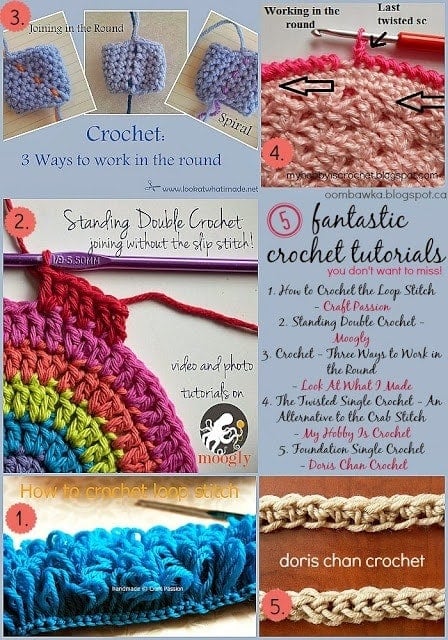 All Images are the property of the Designers Specified in the individual tutorial links.

Of the five listed above, I have tried 3.

I love the standing double crochet stitch and it is a fabulous stitch to use when crocheting items like mandalas; Tamara’s tutorials (both video and photo are available) are very clear and easy to follow.

The foundation single crochet tutorial from Doris Chan Crochet is the best one I have seen – I used this technique when designing my new pattern (Let it Snow! Winter Pixie Bonnet – which is currently being tested). Doris Chan demonstrates the correct (original) technique, as well as, a hybrid technique and the differences between the two.

Dedri’s tutorial Three Ways to Work in the Round – is fabulous. I love how she demonstrates the differences between the 3-ways to work in the round and the consequences of substituting one technique for another – when the pattern doesn’t call for it.  I had only been familiar with two of these before I crocheted Dedri’s Rhinosaur Amamani Pattern – Gregor. The third method really does produce fabulous results and the dreaded joining seam is much less visible.

I have been very interested in trying the loop stitch and Craft Passion’s tutorial looks very clear and easy to follow. I imagine this stitch will make a very soft floor mat, or excellent hair for an amigurumi! I’ve also seen patterns that use this stitch to embellish slippers and make flowers 🙂

You May Enjoy These Posts too: